Why are we headquartered in Rome?

Rome has a historical role in Food. It went from being papal city to a national symbol as the capital of the Kingdom of Italy to the capital of a new republic to global reference point for the central theme proposed by the EXPO 2015: Food. It is headquarters to the major UN organizations dealing with Food Security, Agriculture and Sustainable Development: FAO, WFP, IFAD and is the largest district in the agro-food research in Italy: CRA, CNR, ENEA. It is the headquarters for Bioversity International, an international organization that promotes the protection of biodiversity as well as for the High Level Task Force on the Global Food Security Crisis (HLTF). The historical city center of Rome with the Colosseum, the Roman Forum and the complex of the Imperial Forums constitute the world’s largest archaeological site and is listed as a World Heritage by Unesco. Located in the Region of Lazio, Rome is in close proximity to sea, nature, hills, lakes, rivers and vineyards as well as important historical and cultural landmarks in surrounding towns and villages. 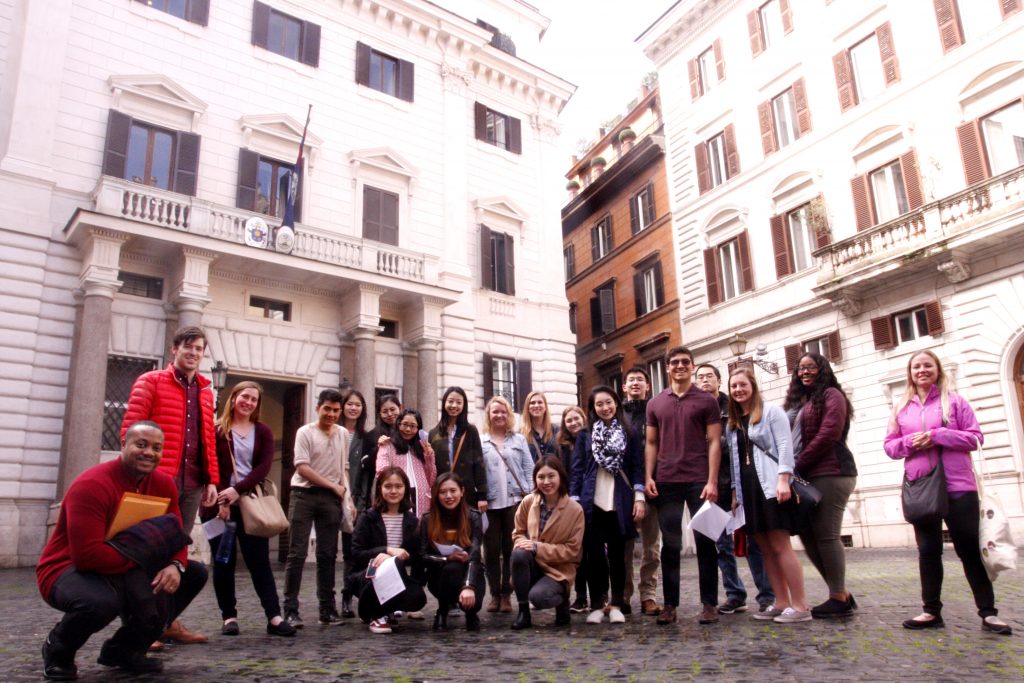 Why do I want to study abroad in Italy?

Being immersed in a country and culture filled with new perspectives is the best way to diversify your academic life. Not only will you learn about Italian culture, history and the food and wine industry, but you will also learn how to survive in a new environment and culture, adapt quickly to it, and be successful in doing so. Not being an Italian native speaker might be a challenge but that is where the real value in studying abroad is. You will be able to adapt outside of your comfort zone and expose yourself to a completely new world that you might have otherwise not known. You will learn Italian and immerse yourself in Italian culture.You can find out about Italy’s culture through its food and discover why food in Italy is unique and different from Italian food in any other country. Reading or watching documentaries is not the same as experiencing Italy in real life and connecting the dots between culture, nutrition, environment, society, economics and politics. The opportunity is tremendously exciting. Although it may seem scary and challenging, it will help you to grow and thrive personally and professionally.

What comes to your mind when you think about Italy? Delicious food? Yes! Culture, art and history? Yes! Venice and Florence? Yes, correct. These answers are only part of an idea someone can have about Italy. Italy is not a huge country. Its surface is as large as the state of Arizona in the U.S.A, though it has a tremendous number of differences in its landscape. A general distinction would be to split it in three areas: North, Center and South, according to geography, history and economic development. This is a common type of distinction used to localize places in Italy, but Italy actually consists of 20 regions. To understand how diverse they are, you could ask two people (one from the Trentino-Alto Adige region in the north and another from the island of Sicily in the south) to have an informal chat and you would see that they probably would not understand each other. This would be because they speak in different dialects. In fact, Italy currently has a huge number of dialects that is almost impossible to count in each region but everybody knows that Italy is the country of hand gestures, so language is not a barrier, not even for foreigners. Moreover, each of the 20 regions has a specific cultural, social and culinary history, influenced by the different cultures that have passed through them over more than two millennia.  But, Italy as a unified country has only existed since 155 years. Nevertheless, its unification did not mean standardization. We have already touched upon Italian linguistic diversity. Italy also represents many separate realities that can vary according to the definition used to unite or separate neighboring areas, cities, and villages. An example of this are administrative boundaries where villages could be separated by a regional boundary, but they would eat the same food and speak the same dialect. On the other hand, two small towns could have the same culinary tradition because of the territory in which they are set, but their inhabitants could speak different dialects due to the populations’ different historical movements. Italy has a significant role in the world’s economy. In fact, it is known to be a European and worldwide leader in the creation of major infrastructures, it has the world’s fifth largest trade surplus in manufactured goods, it is Europe’s second largest exporter and it is home to leading aerospace technologies. Creative minds work on exporting the Italian excellence all over the world. Architects such as Massimiliano Fuksas or Renzo Piano have left their artistic mark in many international cities. Thanks to its ‘Made in Italy’ products, Italy is renowned in the design and fashion industries. The combination of these elements makes Italy a unique place to visit. One can understand its many facets and nuances only by experiencing it firsthand. Learn more about our programs in Italy

According to tradition, Rome was founded by Romolo in 753 B.C. Have you ever seen the famous bronze sculpture of a she-wolf feeding two human infants? One of them is Romolo. The other is his brother, Remo. They are the famous twins linked to the legend of Rome’s founding. According to this legend, the two brothers and semi-gods were sons of Rhea Silvia and Mars, the god of war. Rhea Silvia was the daughter of King Numitore, who ruled in the ancient city of Alba Longa, not far from where Rome would be later. Numitore was deposed by his brother Amulio who wanted to take control, and forced his niece to make a vow of chastity in order to avoid any threats to his usurped throne. When King Amulio found out about the birth of Romolo and Remo, he became furious and ordered a servant to put the infants into a basket and leave them in the river Tevere. The current brought the basket to an area between the actual Capitoline and the Palatine Hills in the center of Rome, exactly where the female wolf found and weaned them. What happened from that moment on is visible thanks to the eternal marks history has left on the city. Through the juxtaposition of buildings belonging to different history and art periods; the coexistence of two separate entities in the same territory – the walled enclave known as Vatican City State and the city of Rome, and the city’s countless piazzas and fountains, one can perceive Rome’s hidden stories. The thematic approaches through which to explore Rome are numerous and complex. The city has been the center of the Roman Republic, an empire, and the capital city of the Christian world. Throughout history, it has become a pattern of cultures, peoples, customs, and the arts.  For this reason, everyone can have a different motivation for visiting and exploring Rome: architects could be interested in seeing the Palazzo della Civiltà Italiana – also called Square Colosseum – in the EUR neighborhood; the faithful could come to see the Pope; archeologists could spend months studying the remains of the Roman forum. The fascinating thing about being in Rome is that the paths of discovery are limitless. To give an example: if you are interested in both ancient sculpture and industrial archeology, Rome has a place for you: the Centrale Montemartini, which was the first public power plant to produce electricity in Rome. Now, within the same premises, it displays a permanent exhibition of ancient art that is a part of the Capitoline Museum’s collection. If you want to learn about the different cultures living in Rome, you should visit the Nuovo Mercato Esquilino, better known as the city’s multicultural market, where you can taste a bit of India, Egypt or Morocco and listen to different languages. Rome also hosts the biggest mosque in Europe. Lovers of nature can visit Villa Borghese, Villa Doria Pamphili or Villa Ada. One can exercise, rest, play ball and have the opportunity to peer into the daily lives of Roman people, such as families, groups of young people, or old couples and friends, as they take time out of their daily routines to catch up and relax. One word links the ancient history of Rome with the present times: innovation. The ancient Romans established aqueducts to provide water for public baths and fountains, promoting public health and sanitation. They also built an outstanding system of roads, some of which are still functional. Today, Rome continues to be a city where innovation is fostered in its many forms. Think about the MAXXI museum project designed by the Anglo-Iraqi architect Zaha Hadid, or the Jubilee Church conceived by the American architect Richard Meier. Learn more about our programs in Italy